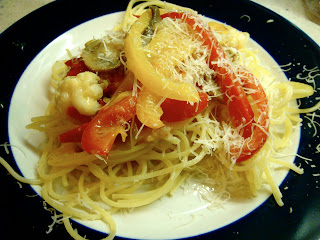 I only started really exploring my own kitchen and cooking when I lived in Japan back in 1995.  If you ever want to eat anything other than Japanese food then you better learn to cook if you live over there.  I never had a need to cook before since I lived with my sister at the University.  She was an awesome cook and always took such good care of me until we were both off in separate directions... she was commissioned into the Marine Corps, I was commissioned in the Navy and so life experiences and travels began.
During my tour in Japan I was surprised to find out how much fun it was to create in the kitchen but my problem was that I was making all this great food and had no one to share it with as I was a single girl at the time.  So what better guinea pigs then my fellow shipmates from the Gtown!  They loved a free meal that wasn't shipboard chow.   My buddy Ralph was my best customer and to this day he says that I actually inspired him to start cooking and wow what a great cook he is!!  He's got the passion and the skills and would send me recipes on a regular basis, however I wasn't allowed to tell anyone because he thought it was such a chic thing to do.  Sorry Ralph but you are tough enough that no one would ever call you a chic.  This is one of his great creations that I haven't made in years and when I saw Lobster in the frozen section of the Commissary it was the first thing I thought of.  Yummadumdum!  This is even better than I remembered.  If you want to eliminate the pasta and cheese for a Paleo dish just use julienned zucchini and yellow squash and you won't be disappointed.
Print Recipe
Tri Pepper Linguine with Spicy Lobster