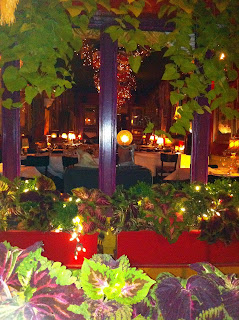 In true Anthony Bourdain style my husband and I had one of the most amazing seven course meals at Tuckers Bistro in Downtown Newport, Rhode Island, a very quaint 1930's French Bistro.  Yep I did say SEVEN.  If I may, the BLUF (bottom line up front for you non-military types) ABSOLUTELY AMAZING!  Not only was did this restaurant have a menu where almost every dish was designed to be gluten free or could be easily turned gluten free, they really and I mean really understood the concept and meaning behind eating and living a lifestyle as such.  It also helps that three of there staff members are gluten free.
My husband and I have a top three list of our best food and restaurant experiences and this meal and atmosphere has taken a spot in the three... it is right up there with our amazing Paris dinner experience at La Reminet.  My husband doesn't think it tops that one but I have to disagree because of the involvement with the gluten free menu that Tuckers has.  It was a much safer place for a Celiac to eat. 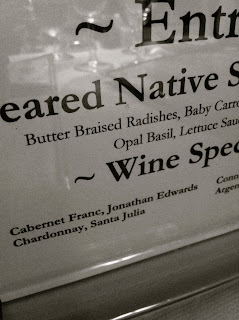 Ok, now on to our Seven Course Chef's choice meal...
First to start with the wine of choice that caught our eyes and immediately made us recall one of our favorite scenes in the movie Sideways... Cab Franc... We have never had a Cabernet Franc so we needed to validate if in fact is it "flabby" as Miles states.  We had to disagree and really enjoyed it so... we ordered a bottle of this Jonathan Edwards from Connecticut.  To join us on the table during our first sips of wine were two small bread baskets, one full of gluten for my man and the other gluten free for me.  I was in shock... a tapioca flour cheese filled baguette that tasted so fresh that I thought they baked it there that night.  That was not the case, it was a frozen loaf by Against the Grain that you can buy in the freezer section of A Market in Newport.  As you can tell already this was not a Paleo night for me but so worth the cheat! 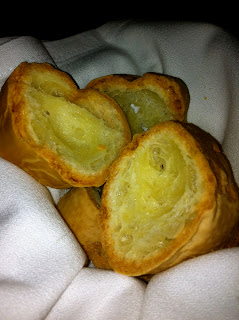 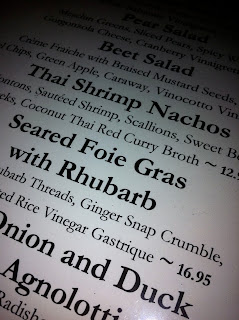 The other item on the menu that caught my husbands eye was the Froie Gras.  He is a big Anthony Bourdain, No Reservations, fan and ever since he saw that episode he has been curious.  That was one item that we asked for specifically however I had no idea what to expect or what I was eating until after we finished and looked it up on wikipedia... This was the 6th course in our meal and was fantastically served with a rhubarb sauce, but I don't think I could bring myself to having it again. 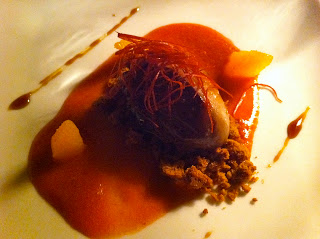 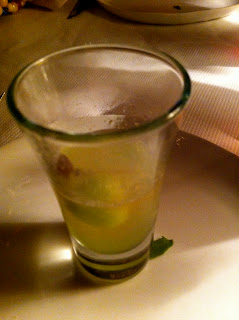 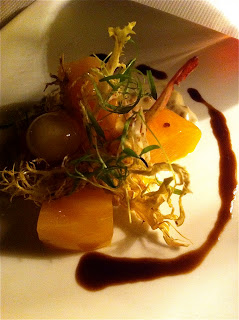 Second Course:  Beet salad with what I think she said and encapsulated apple puff that was filled with the sauce/dressing.  I just love beet salads and this was delicious!! 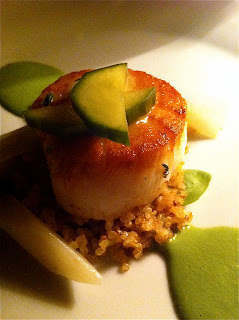 Third Course:  Scallop over quinoa with a sorrel cream fraiche and a hint of lemon... Melted in our mouths! 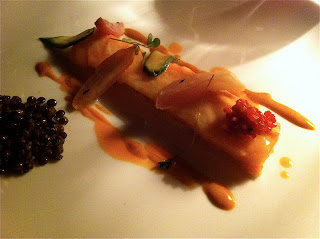 Fourth Course:  Salmon with a side of lentils.  This was absolutely the most tender and moist salmon I have tasted.  What am I doing wrong at home, I thought.  Then we spoke with the Chef at the end of the night and found out that he cooks it in a dehydrator which seems very odd and amazing. 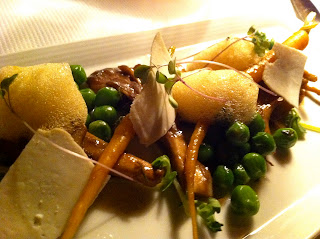 Fifth Course:  Mushroom pea salad with bacon bubbles and ricotta slices.  Not sure how he created a bacon bubble but it was unique and very tasty but what wouldn't be tasty that has bacon in it.
Sixth Course:  The Froie Gras mentioned above. 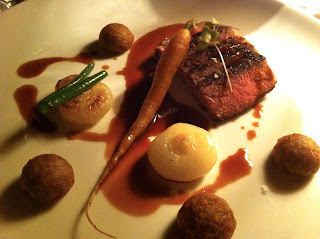 Finally the Seventh Course:  Angus Beef with potato puffs.  By this point in the night I couldn't quite remember the detailed explanation that our waitress gave us but I do remember that it was excellent.
I know this seems like a TON of food however we didn't feel stuffed and the size of the courses were perfect.  Not only were all of these gluten free dishes they could easily become Paleo friendly as well.  I liked the fact that the amount of complex carbs was so minimal on the plate that even if you did have it you wouldn't feel over stuffed.  So we didn't stop there... Dessert was too tempting... Dark Chocolate ice cream with dehydrated flourless chocolate cake crumble.  Mmmmmm good. 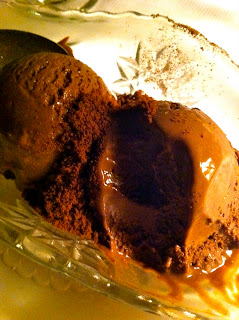 If you are in Newport this is a must!  I hope you all get a chance to experience it.
Email ThisBlogThis!Share to TwitterShare to FacebookShare to Pinterest